A few weeks ago, Caroline posted an opportunity on Running Bloggers to review a product called Island Boost.  I had coincidentally just bought a packet from REI because I love trying new products to help with my running performance during these hot and humid Virginia summers.   The reason I initially chose Island Boost over other products is the fact that it was a liquid, not a gel which made it seem like it would go down easier…and well, it was something I had never seen before.  Most gels and chews upset my stomach giving me cramps and I usually end up having to run to the bathroom either during or right after a training run, so I’m always looking for something to fuel with.

When Laura Mildron, the creator of Island Boost, contacted me and explained a little more about the product, I was more than excited to try it.

“Our product is unique from competing products, like gels and chews in many ways:
A faster fuel – hits the bloodstream in under 5 minutes
Gentle on the stomach – many experience nausea or vomiting (or worse) in taking fuels
It is a liquid, not a thick get to get stuck in the back of the throat
No artificial manmade carbohydrates (most use maltodextrin)
No caffeine or other stimulants (safe for children)
Wonderful frozen, a great way to refuel on hot training days
Vegan
Non GMO
Gluten free”

I also like that she based the creation of this product on her personal experiences after trying other fueling products that didn’t work for her, you can read more about Laura here.

Last week, I received a package of three samples of the good stuff from the folks over at Island Boost.  It currently comes in three flavors: 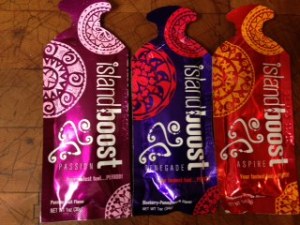 After trying all three, my favorite is the Blueberry Pomegranate

{I used the product four times before writing this review, all on 6+ mile runs (so runs greater than 45 minutes) so I could honestly review it}.

The instructions on the packet recommend taking in a packet every 45-60 minutes, so on the first run of 8 miles I took I took in a packet around 50 minutes.  No joke, I felt the effects within 5 minutes as the company advertises.  I finished the 8 miles strong without any need for any extra fuel (except water).  That day, I had tried the Strawberry-Orange flavor, which tasted like orange juice.  It  was a little acidic for me, but maybe that was because it was super-hot outside and the packet had warmed up.  {FYI: you can freeze these prior to use for a cool treat, I tried it, but mine heated up with my body heat}

If the packets were just a bit smaller, maybe I could fit two into my Camelbak on long runs, but no biggie, the other packet just went in my shorts pocket.

The second time I tried it was on a 9-miler, and I followed the same routine and felt refreshed after trying the Passion Fruit flavor, much less acidic than the Strawberry-Orange, and very sweet.  It worked like a charm and I went onto complete my 9-miler.

The third run was a 12-miler, and I ended up using two packets (both in Blueberry-Pom–my fave!!), one at 45 minutes, one about 30 minutes later.  I chose to do the second packet about 30 minutes later because I was feeling dizzy, but I was also dehydrated and was sweating like no tomorrow.  The Island Boost packet definitely helped with my dizziness, but you can’t really correct pre-existing dehydration on a run when it is almost 90 degrees out and mega-humid–totally my fault.

The best part of all, this didn’t cause me any gastrointestinal (GI) distress.  I didn’t cramp, I didn’t feel nauseated, and after the run I got to relax instead of finding the nearest restroom—yay I found my marathon fuel!

If you’re like me and have trouble stomaching (and swallowing) the gels/chews and want quick boost during your run (or cycle, or swim, or whatever you do), give Island Boost a try.

You can read more about Island Boost and where to purchase here.

**Disclaimer:  Island Boost sent me samples to review, I was not compensated in any other way.  All opinions are my own**